Dress rehearsal for To Kill A Mockingbird was a real success.  Playing before a preview audience of about 50 people, the cast really rose to the occasion.  The narrator – the adult Jean Louise Finch played by Kandi Krumins – was especially animated in bringing the audience into the story and setting up each transition.  Her younger self, Nina White as Scout, got several laughs with her innocent deadpans.   Everyone was high energy and the emotional impact of the play was palpable.  And the minimalist set served as the perfect backdrop.

As assistant director, I found it very gratifying to see our months’ of hard work finally come to fruition.   Director Michael Schacherbauer has given the cast a solid foundation on which to build and develop their characters.   But he encourages each actor to bring their own personalities into their roles.  For example, the Finch neighbors include: Miss Stephanie Crawford, the town gossip, who is delightfully played by Blythe Philip;  Miss Maudie Atkinson, played by Pat Rodgers, who is a maternal influence on the Finch children; and Corinna Weber who is gloriously grumpy as old Mrs. DuBose as she scolds the kids incessantly.
Audiences are in for a real treat when the play opens this weekend.   Opening night is Friday September 30, and tickets are available at www.farmingtonplayers.org or by calling 248-553-2955.  Find us on Facebook at "Farmington Players" http://www.facebook.com/profile.php?id=100000154976336
Posted by Tony Targan at 7:47 PM No comments: 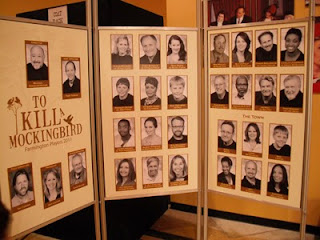 Sunday was a speedline rehearsal for the cast of To Kill A Mockingbird as we gathered at the Barn to review the script.  The goal was to recite lines as quickly as coherently possible, with overlapping cues, to test the actors’ memories and build some momentum going into the last few rehearsals.   The usual Southern drawls and deliberate pacing were replaced by staccato monotones as actors spit out the words in a fast-paced rhythm.
The three youngest actors (Nina White as Scout, Patrick Vietor as Jem, and Nicholas Zupancic as Dill) displayed an amazing facility for the speedy wordplay.   They amused themselves and the rest of us with how differently the lines sounded when read like a legal disclaimer at the end of a TV infomercial.  As assistant director, there was a method to my madness in running this speed drill.  I told the cast, “Hear how flat and plain the script sounds by itself.  It is amazing what you are doing as actors to breathe life into the script by adding your own emotions, inflections and characterizations.”
I am very proud of this cast:  Their dedication during countless hours of rehearsal and their attention to detail in developing their characters will definitely show in their performances.  We have three more rehearsals to fine-tune the play, and am I am confident that audiences will be pleased with the end result when the show opens this Friday, September 30th.
Tickets are available at www.farmingtonplayers.org or by calling 248-553-2955.  Find us on Facebook at "Farmington Players" http://www.facebook.com/profile.php?id=100000154976336
Posted by Tony Targan at 4:17 PM No comments:

I run a lot of road races.   At the starting line of every race, the starter’s commands are always “On your mark.  Get set.  Go!”   Ordering events in this manner is universal and expected.  You must get ready before you can set yourself to go.   In fact, how could you do it any other way?   When I was on the Mockingbird set yesterday during our seven-hour tech rehearsal, it occurred to me that staging a play actually reverses that process.  We GO with just the words at the first read-through and do our initial blocking in the lobby.  Then we design and build the SET as we continue rehearsals while walking through imaginary doors. We aren’t finally READY to stage the play as it will be seen until a few days before opening night.   It is an amazing process to see the playwright’s words come to life, the action take shape, and the set, costumes and props give context to the play.
On tech day, this all came together in a very tangible way.   The crew (director, assistant director, technical director, producer, stage manager, costume designer, sound designer and props manager) met in the Barn lobby at 10:00 a.m.  We flipped pages through the entire script, identifying every light cue, sound cue and noting necessary props.  The director’s vision was balanced against the technical director’s assessment of the feasibility of creating certain effects.  At 2:00, the cast arrived to walk through the cue-to-cue, an abbreviated run-through that tests the timing and effectiveness of all the lighting and sound cues.  We finished around 5:00.
Our staging of Mockingbird is somewhat unique in that there is no main curtain.  Therefore, except for one 15-minute intermission, the action is continuous.   This means that every scene or set change must take place in full view of the audience.   There is no time to stop the action and get ready for the next scene before we go.   The most imaginative transformation is the conversion of the Finch home and neighborhood into the Maycomb courthouse for the critical trial scene.  Steve White’s creative set design and technical director Tim Timmer’s impeccable set construction have made this seamless transition possible.  But to experience the full effect, you have to GO see the SET for yourself.  We’ll be READY by September 30th! 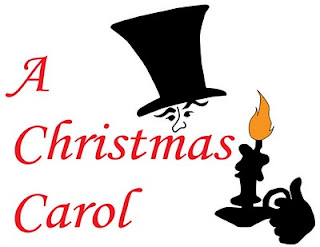 Although we are still two weeks away from opening night (September 30th) of To Kill A Mockingbird, tomorrow will be Christmas at the Farmington Players Barn Theater!   (No, I haven’t come unstuck in time, although my personal space-time continuum is feeling a bit warped these days due to seemingly non-stop rehearsals.)  I am talking about auditions for A Christmas Carol, which are scheduled for 2:00PM Saturday September 17th (registration at 1:30) at the Barn (32332 West Twelve Mile Road, Farmington Hills, MI 48334).
This version is not your grandfather’s Christmas Carol.   In our adaptation, Charles Dickens' beloved ghost story comes to life in a whole new way, as seen through the eyes of Dickens himself. The author gathers his family and friends for a Christmas Eve celebration and draws them into the process of creating A Christmas Carol. As the people in Dickens' life are transformed into the familiar characters of the classic tale, we are reminded of the real meaning of the holiday season.
Each actor will need to create a number of characters from the classic tale, as well as portray members of the Dickens family (for complete character descriptions, see the audition notice at http://www.farmingtonplayers.org/documents/ACCauditions_000.pdf).  Readings will be selections from the script.  A British dialect will be required. Email any questions to AChristmasCarol@farmingtonplayers.org.
Dickens’ London bears little resemblance to Maycomb, Alabama in 1935, so it may seem incongruous to hear British accents on the Mockingbird set, but no more bizarre than holding auditions for A Christmas Carol in mid-September!  Tickets at www.farmingtonplayers.org or call 248-553-2955.  Find us on Facebook at "Farmington Players" http://www.facebook.com/profile.php?id=100000154976336
Posted by Tony Targan at 9:48 AM No comments:

This Mockingbird Will Sing

The Farmington Players' production of To Kill A Mockingbird opens Friday September 30th and runs through October 22nd.  If early rehearsals are any indication, this play is going to be a real treat for audiences of all ages.   Most of us have either read the book in school or seen the movie, but Christopher Sergel's adaptation of Harper Lee's classic is unique.  Jean Louise Finch, the adult Scout (warmly played by Kandi Krumins), has returned to Maycomb Alabama 30 years later and serves as the narrator of our play.  The audience observes the action through her recollection of Scout’s childhood memories and even becomes the jury during the climactic trial scene.   The lead role of Atticus is played by Greg Bowman, who many will recognize as a radio broadcaster on WWJ Newsradio 950.  Greg says, "I'm honored to be able to bring Atticus to life on stage.  I think we would all like to be like him, a real hero and someone who, as the story says, can be trusted to do the right thing."  The three child actors in our performance – Nina White as Scout, Patrick Vietor as Jem, and Nick Zupancic as Dill – display a maturity and sense of comic timing beyond their years.   The falsely accused Tom Robinson is convincingly portrayed by James Hodges and Camille Jamerson is emotionally charged as his distraught wife Helen.   Over 25 talented cast members ensure that this Mockingbird will not only sing, but will leave audience members with much to think about.  Tickets at www.farmingtonplayers.org or call 248-553-2955.  Find us on Facebook at "Farmington Players" http://www.facebook.com/profile.php?id=100000154976336