When you are in the “middle” of something, it always has great potential for transformation.  Whether you’re talking about a mid-life crisis, middle school, or mid-winter, the “mid” is what makes it interesting:  the transition from here to there is fraught with uncertainty, and the outcome still hangs in the balance.  Such is the case with Mid-Winter Break, a family friendly musical comedy coming to the Farmington Players Barn Theater on June 2 – 4, 2017.

Just as middle school students grow up quickly as they make the transition from childhood to young adulthood, several cast members have blossomed in the two years since Mid-Winter Break was first performed in Waterford in 2015.  Aryn Hillman, who plays Beth, had just turned eleven about a month before the show originally went up.  Now 13, Aryn says, “I was interested in doing the show again because I was excited to see the revisions that had been made and see if any other returning cast had changed as much as I had. This is now my eighth performance and I know that in just the past two years, I have matured a lot. I was excited to come be a part of the show with new skills and a new perspective.”   Ayrn describes her character Beth as being “quite similar to me. She can be sassy when she wants to be, but can also be a little … blank from time to time.  Like Beth, I'm in 8th grade, and my friends have become kind of boy crazy. I’ve had to give a lot of advice to friends in the same or similar situations as Juniper.  Though the responses Beth and I would give when asked for advice about guys are vastly different.”

Aryn knows audiences will enjoy Mid-Winter Break for multiple reasons:  “One reason is the humor. It's all family friendly, but can still make people of all ages crack up. Another reason would be the familiar frustration with middle school. I don't know about everyone, but I’m in 8th grade, and I could not be more excited to get out of middle school and head to high school. Finally, the show is just fun in general. From the absurdity of the dreams, to the musical numbers, I think it should leave everyone with big smiles. Everyone in the cast is very talented, and once you combine that with amazing directors like Kandi [Krumins] and Dave [Reinke] who are doing everything they can to make this show great, I think there's no way you can't enjoy the performance!”

Aryn is from Waterford and among her favorite things are music, theater, creative writing, drawing, singing, and linguistics. And you might not know this about Aryn:  “If I could have any superpower, I would want teleportation. If I got stuck on a deserted island I would bring my phone, a portable charger, and cooler packed with drinks and ice cream. If I could visit any country for two weeks, I would pick South Korea.”

Whether you are stuck in a rut, stuck in the middle, or just plain stuck in life, sometimes seeing things from a different perspective is what it takes to restore order to your world. In Mid-Winter Break, a family friendly musical comedy coming to the Farmington Players Barn Theater on June 2 – 4, 2017, Madison Krumins learns how to get unstuck.  Madison plays Juniper Parks, older sister of Norman (played by her brother Carter), the Parks’ family’s middle child around whom the play revolves.  As Madison says, Juniper is “a normal high school girl. She and her two best friends, Beth and Eve, are brainiacs in everything but the boy department. My favorite part about the role is the many different characters I get to portray in different dream scenes.” And while Madison is not a middle child, “I have definitely been in Norman's position of feeling ‘stuck.’ I think everyone can relate to that in some way or another. Sometimes, we all go through rough patches, and we don't realize how many blessings we actually have until we go through those tough times.”

Mid-Winter Break is truly a family affair, as it is written and directed by Madison and Carter’s mom, Kandi Krumins.  Both kids appeared in the original 2015 production (when in middle school) and have grown up considerably since then. Madison says that “one of the benefits of having your mom as a writer is that she can write a song to fit your range. She was able to write the song “Divinity” to fit the highest notes I could hit back in 2015. It's a very fun song to sing.  I've been able to watch the whole progression of Mid-Winter Break, from the first original ideas, to the first official revision, to the final production we're just organizing now. It's amazing how much work goes into creating and producing a full-length musical. I definitely wanted to be in the show to support my mom in her big project. She's a great writer and I'm so glad that she's able to do this at the Barn!”

Madison knows audiences will enjoy Mid-Winter Break “because it's unpredictable. It's different. Every scene is new and whimsical. It has stage fighting, tangos, princesses with cell phones, cross-dressing, an ex-Navy SEAL grandpa, cupcakes, and anaphylaxis all in 90 minutes. There are comedic moments, there are touching moments. Overall, it's just a well-rounded show.”

Madison attends Kettering High School, plays classical and jazz saxophone and is a drum major in marching band. Favorite recent theater credits include Christine in Phantom of the Opera at Kettering and Margot Frank in the Barn's Diary of Anne Frank last year.

Wanna Get Away? Alec Manoian Makes His Escape in Mid-Winter Break

As the airline commercial goes, “Wanna Get Away?” Do you ever feel like you need a break from your own life?  Do you sometimes feel like you are stuck in the middle?   Such is the fate of middle school students in Mid-Winter Break, a family friendly musical comedy coming to the Farmington Players Barn Theater on June 2 – 4, 2017.

Mid-Winter Break is written and directed by Waterford resident and Barn member Kandi Krumins.  A former public middle school teacher, Kandi knows the trials and tribulations of teenagers all too well.  Her own children, Carter and Madison Krumins, are in their teens; both appeared in the original 2015 production (when in middle school) and they are also in the updated 2017 production.  Carter plays Norman.  Being in the middle ALL the time has taken its toll on Norman.  But having a best friend (Noah Babala) that LOVES being in the middle makes things even worse.  Throughout a series of dreams, Norman and his classmates, teachers, and family take a fantastic journey to glimpse what life is like "on the other side of the fence."

One of Norman’s classmates in Mid-Winter Break is ensemble cast member Alec Manoian.  Alec describes his roles as including a “servant who remains loyal to King Norman, and a dad and a high school student that can hardly wait for the bell to ring so he can finally relax.”  At age 14 and a junior high school student, Alec “feels likes I've been preparing for this show all school year. I mean, what student doesn't wish mid-winter break would come sooner. The fact that this show is about kids my age just made it all the better!”  Alec loves acting and enjoys the fact that Mid-Winter Break is “completely original! Nobody will know the story walking in, which means nobody will have any preconceived ideas about the roles and how they should be performed and compare you to anybody else that they have seen perform the roles.”  Audiences of all ages are sure to love this family friendly show.  As Alec says, “I think the songs are great! They are very catchy and stick in your head. I find that I even sing them throughout the day at school.”

Alec is currently in 8th grade at St. Michael School in Livonia and will be a freshman this fall in the Creative And Performing Arts (CAPA) program at the Churchill High School in Livonia.   Alec got his feet wet at the Barn working with the tech crew on Spamalot, where he met Kandi and several other cast and crew members who also ended up being involved in Mid-Winter Break.
Reserved seats for Mid-Winter Break are available now at www.farmingtonplayers.org or by calling the box office at 248-553-2955.  All tickets are only $12 and show times are as follows: Friday, June 2, 8pm;  Saturday, June 3, 8pm; and Sunday, June 4, 2pm.  One weekend only!
Posted by Tony Targan at 1:40 PM No comments: 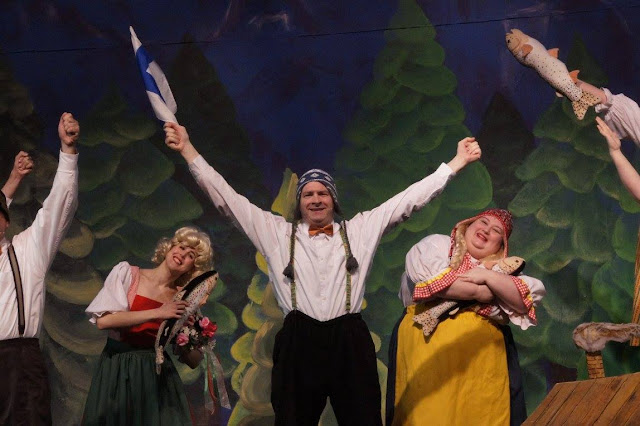 As English philosopher John Locke once wrote, “A sound mind in a sound body, is a short, but full description of a happy state in this world.”   If that’s the case, Eric Nogas must be one happy guy.  Eric not only plays an ensemble member in Monty Python’s Spamalot, but as sound designer, he has played an instrumental role in shaping the Farmington Players’ production. Eric has assembled a cacophony of sound effects from thunderclaps and explosions, to farm animals to flatulence.  Not to mention pre-show announcements and music, and even the “voice of God” (pre-recorded by the Python’s Eric Idle).

After designing sound for the past five shows at the Barn, Eric decided it was time to venture onstage as an ensemble member.   Eric likes that he gets to play “many roles including a Finlander, a dead body, a British knight, a French guard, and a Monk.  We have our hands full with all of the dancing we have to do including learning how to tap dance.  In addition to the dancing, we have to change costumes so many times we don’t know if we are coming or going.”   Despite not being a Monty Python fan, Eric had heard so many great things about Spamalot that he “wanted to be part of that fun and I have not been disappointed.”   Only after putting together the preshow music, Eric says, “did I truly understand that Python was very much ahead of their time and on the cutting edge of comedy.  If you like to laugh, you will love this show. It has fast-paced, clever writing, and of course Monty Python is not afraid to be controversial.”

Eric grew up in Livonia and lives in Farmington with his wife Christa and kids Jack (14) and Sydney (8).  He has worked at Snelling Staffing Service’s for the last 17 years as a Branch Manager of the Southfield office.  Eric remarks that “everyone at the Barn has been very welcoming and I am amazed by all the hard work and passion that everyone brings to each show.  I have not worked with many of our cast before but they make coming to rehearsal fun and we are always laughing.”

Monty Python’s SPAMALOT has 12 performances at Farmington Players Barn Theater from April 28 – May 21.  The show is proudly sponsored by TruVista Wealth Management.  Tickets are available online at farmingtonplayers.org or by emailing boxoffice@farmingtonplayers.org or calling the Barn box office at 248-553-2955.
Posted by Tony Targan at 1:17 PM No comments: