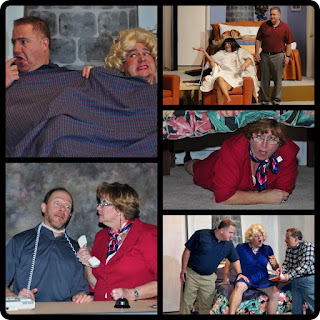 If time flies when you’re having fun, then it’s no wonder that the three-week run of Whose Wives Are They Anyway? has flown by so fast.  I have thoroughly enjoyed being in this show.  Every night is a new opportunity to make people laugh.  We even get a few titters with the pre-show announcement that warns patrons to “Have fun …  or else.”  Once the characters are introduced and the plot is set, the audience is quickly engaged in the action.  The laughter builds slowly as the seemingly straight-laced characters begin to lose their inhibitions and engage in increasingly outrageous behavior. We get some chuckles and giggles at first.  By the time “Mrs. McGachen” – played by Geoff Wehner – is revealed, the snickers and snorts have turned into hoots, chortles and cackles.  The audience loosens up as the characters lose their decorum.  Before long, the sustained laughter swells throughout the theater, and as actors, we have to hold … and hold … and hold some more until the laughter finally ebbs enough to say our next lines.
Some of my best laughs are induced by my reactions or “takes” to what other characters are saying or doing.   My character Wilson, a cantankerous old handyman, is often in the wrong place at just the right time to witness many of the shenanigans.  My signature line is “I don’t believe it!” which I say – or silently mouth – no less than 18 times.  Getting the biggest laugh often depends on split-second timing.  Comedy is like fly fishing: You have to start with a good lure, garner attention through movement, land your line at the perfect time, and punch the right word to set the hook.  Then you can reel them in.  Once the feeding frenzy begins, the laughter builds and become contagious, and the audience swallows the jokes “hook, line and sinker” and keep on laughing till it hurts.   After the show, a number of patrons have said to me “My face hurts from laughing so much!”  That kind of laughter is certainly music to my ears.
Whose Wives Are They Anyway? has three more performances:  Thursday March 1, Friday March 2 and Saturday March 3.  Don’t let the last laugh be on you!  Get your tickets before they’re gone at www.farmingtonplayers.org or call the box office at 248-553-2955. Find us on Facebook under "Farmington Players".
Posted by Tony Targan at 8:16 AM No comments:

While this headline may look like some cryptic text message from your teenage daughter, what I am saying is that Whose Wives Are They Anyway? (“WWATA?”) will definitely leave you Laughing Out Loud (“LOL”) or more likely, Rolling On The Floor Laughing Your Ass Off (“ROTFLYAO”).
Tonight (Friday February 17) is opening night, and the cast and crew are excited to finally bring this American farce to the Barn stage.   The set has eight doors or entrances and the eight actors are constantly flying in and out of them so fast that your head may spin trying to follow all the action. (My character, Wilson, has 25 entrances alone and Mrs. Carlson, played by Mary Ann Tweedie, has 21.)  The two beds, couch and chair get plenty of “action” too, with actors falling all over the furniture and on top of one another in this comedy of errors.   And did I mention that there is plenty of cross-dressing and under-dressing just to keep things interesting?
The basic premise is that two male executives go off for a golf weekend without their wives, only to bump into their new boss, who confides that “No one like that will ever work for me.”  So, the guys have to produce “wives” on short notice.  They might just get away with it too, but their real wives show up unexpectedly and their scheme starts to unravel from there.   As John Boufford’s character David McGachen laments, “Things are really getting out of hand!”
If final dress rehearsal is any indication, there will be plenty of laugh out loud moments for the audience.  The fast pace, "sexual shenanigans", surprising twists, and physical comedy will keep people guessing – and laughing – all night long.  And you definitely won’t want to miss the two Mrs. McGachens and the three Mrs. Bakers.  As Wilson, says, “I don’t believe it.  Now there’s three of them. And I thought I’d seen it all!”
Whose Wives Are They Anyway? opens Friday February 17 and runs through Saturday March 3.  To make sure you “see it all,” get your tickets at www.farmingtonplayers.org or call the box office at 248-553-2955. Find us on Facebook under "Farmington Players".
Posted by Tony Targan at 8:30 AM No comments:

Self-image is an illusion.  When we look in the mirror, “we are vain and we are blind,” to quote David Byrne of the Talking Heads.  We tend to see ourselves as we want others to see us.  But if we are being honest, despite all our attempts to keep the ravages of time in check, none of us is getting any younger.
When auditioning for plays, actors are usually asked to provide their age range on the audition form.   I am often told that I look much younger than my actual age (50), so I routinely list my age range as 25 to 55.   In fact, in my last play (A Christmas Carol), I was cast as Clarkson Stanfield, a 32 year-old painter friend of Charles Dickens.  When I auditioned for Whose Wives Are They Anyway?, I read for John Baker, a 30-something business executive.  So when I was cast in the part of Wilson, a 60-something handyman at the Oakfield Golf & Country Club, I was a bit surprised at first.
Although I am closer to my 60s than my 30s, I just don’t see myself as the “old guy.”  Wilson is grouchy, sarcastic, cantankerous, and a hypochondriac … you name it, he suffers from it.  He even complains that a carbuncle – one of his many ailments – “could have been caused by running.” Ironically, I love running:  I can still run 10K races at a sub-7:00 minute pace and I am currently training for my 12th marathon.  But to play the part of Wilson, I must “act my age” and affect the characteristics of a grumpy old man.  It took me awhile to develop his character.  At first, I adopted a gravelly voice and grew a scraggly beard.  Soon, my posture slouched and my walk slowed to a shuffle.  The finishing touch: I hiked my belt up above my navel in the quintessential old-guy fashion statement.
To be a good actor, you have to commit to the part.  That means going all the way, not half-way.  Not necessarily over-the-top, but all-in.  You have to check your ego at the door and not worry about what people will think.  You really have to become the character and react to people and situations as he would react.  The closest analogy I can think of is when I studied French in high school and I finally got to the point where I was actually thinking in French, rather than translating words from English to French.  So now, I have to become Wilson, not just play him.  So during the next month, if I appear more cynical and sarcastic and move slower than usual, you’ll understand why.
Whose Wives Are They Anyway? opens Friday February 17 and runs through Saturday March 3.  For tickets, go to www.farmingtonplayers.org or call the box office at 248-553-2955. Find us on Facebook under "Farmington Players".
Posted by Tony Targan at 8:01 AM No comments:


Directing comedy is like conducting a marching band.  Everyone plays their own instrument, but ultimately it’s up to the director to make sure everyone’s marching to the same beat.  Add blocking and timing issues and you begin to understand how complicated comedy can be.  And if it’s a farce, it’s like the marching band is running in formation through revolving doors.  Director Dennis Broadhead understands the unique challenges presented by Whose Wives Are They Anyway?  “My role as the director is one of a trainer, teacher, jokester and a little bit of a cattle prod.”  Dennis’ main goal is the give the cast direction on certain scenes, “so that they will understand my vision for the show.”  In Whose Wives, instead of revolving doors, the characters play musical beds:   People are constantly running in and out of bedrooms and falling on top of one another in compromising positions.  They overhear and misunderstand dialogue, particularly when the telephone system in the golf club goes haywire.
Dennis is in charge of herding all the actors and says that in “a show like this, the biggest challenge is the split-second timing that is required in many of the scenes.”  This comedic timing requires a lot of trust among the actors, the equivalent of falling backwards and hoping that someone is there to catch you in time.  Dennis observes that “this cast is seasoned and they all work well together.  It will be a joy to put this show on with such a talented group of people both on the stage as well as backstage.”
Dennis is no stranger to the director’s chair, but the last show he directed was “Fools” when the new Barn was still under construction.  This past fall, Dennis returned to the stage as “Judge Taylor” in “To Kill a Mockingbird.”   Doing comedy, especially farce, is one of his greatest joys in theater: “The thing I enjoy the most about directing a comedy is when the cast can do a ‘comedic bit’ correctly so that everyone, including myself, cracks up laughing.  I wanted to do this show because nothing is more pleasing than hearing an audience laughing at something that I had a hand in creating.”

Whose Wives Are They Anyway? opens Friday February 17 and runs through Saturday March 3.  For tickets, go to www.farmingtonplayers.org or call the box office at 248-553-2955. Find us on Facebook under "Farmington Players".
Posted by Tony Targan at 8:11 AM No comments: