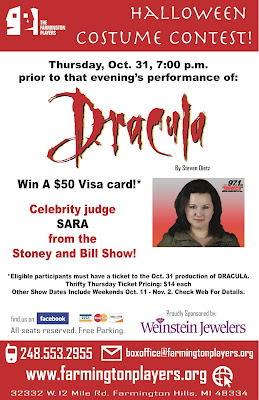 Need something fun to do on Halloween?  Come to the Farmington Players Barn Theater prior to the Halloween night performance of Dracula!  Ticket-holding patrons to that night’s show may enter the costume contest judged by “Sara” of “The Stoney & Bill Show” on 97.1 FM The Ticket. The winner will receive a Visa Card worth $50.  Contest starts at 7:00 and curtain is at 8:00.

Even if you don’t want to dress up, you’ll still be in for a bloody good time. “Yes, there will be blood!” said technical director Keith Janoch. “We are brewing up blood recipes” for various scenes.” In addition to blood, Janoch said, “we are touching all avenues of effects: Electronics, glowing eyes, plumbing to duct fog around the stage, flame effects, and of course, lighting.”  Janoch’s background as a mechanical engineer prepared him well for the technical challenges posed by Dracula, but he confesses that he got his start with electronics “as a kid doing haunted houses in the basement!”

The Farmington Players' production of Dracula is proudly sponsored by Weinstein Jewelers.  The show’s final three performances are October 31, November 1, and November 2. Tickets can be purchased online at www.farmingtonplayers.org or by calling the box office at 248-553-2955.
Posted by Tony Targan at 1:31 PM No comments:

Count Dracula May Suck, But This Dracula Certainly Won’t! (Guy Knows Why)

"Believe in what you cannot. That is the essence of faith. To accept what cannot be proven." So says Professor Abraham Van Helsing, who tries to get others to see the truth, even if it requires them to believe in what they cannot see.  Guy Copland plays Van Helsing in the Farmington Players production of Dracula, which opens this Friday October 2nd.  Guy describes Van Helsing as a “philosopher and metaphysician who is ahead of his times. The most advanced scientist of his day, he knows more about obscure diseases than anyone in the world. He is noble, worldly, and has studied Count Dracula for many years. And thus, knows of his secret and that vampires do exist.”

Despite this superior knowledge, Van Helsing tries to convey his message in a manner that allows others to find the truth.  As Guy says, “He knows more than anyone else. Yet, he is humble by all means and not arrogant at all. Just a man who can see things not only as they are, but as what they could be, and goes about his business like any other person. Mainly because the world isn't ready for some truths. … He answers a question with a question, or a riddle, in a way to help whomever he is speaking with realize for themselves the obvious answer, which is something that is not usually normally accepted or excepted. As Van Helsing says, ‘I have learned not to belittle anyone's beliefs - no matter how strange - for it is not the ordinary things which close our minds, but the extraordinary things. Those mysteries on the fringe of our thinking.’"

Guy can relate to the mysteries of Dracula from some extraordinary personal experiences, including “the fact that I did see a UFO not once but twice in the same night over a car factory one October many years ago, and have seen, heard, and felt the presence of ghosts when I worked at The Phoenix Theater back in the early 1980's. … I guess the fact that I have indeed seen, heard, and do believe all my encounters to hold true, is the same as Van Helsing who knows of vampires and their existence, yet doesn't parade around telling people about them. After all, there are a great many people would think us mad for doing so.”

Guy speaks glowingly of his “top drawer” cast mates: “Meredith Deighton (Mina), who is a delight to work with, David Galido (Dr. Seward) who is perfect in his role, and Gary Weinstein who creates an absolutely memorable madman as Renfield.”  Guy is no stranger to professorial roles, having last graced the Barn stage as Professor Horace Gilmer in To Kill A Mockingbird.  Guy is also a talented voice actor (see his website at www.motorcityvoiceover.com).

The Farmington Players' production of Dracula is proudly sponsored by Weinstein Jewelers.  The show runs October 11 through November 2. Tickets can be purchased online at www.farmingtonplayers.org or by calling the box office at 248-553-2955.

Posted by Tony Targan at 2:51 PM No comments:

Meredith Deighton Is a Ray of Light in Delightfully Dark Dracula

“This Dracula is dark. It's sexy. It's full of mind-blowing effects and I couldn't be more ecstatic to be working on this particular version.”  So says Meredith Deighton, who plays Mina in the Farmington Players production of Dracula.  Meredith had no interest in playing in a “campy” Dracula, saying, “I was hesitant when I saw the audition notice, thinking it would be more along those lines.” But director John Boufford assured her that his Dracula would be very faithful to Bram Stoker’s original, right down to the last bloody detail.

Boufford also used the image of a duck – calm on the surface, paddling like hell under the water – to describe her character.  As Meredith says, “There is an innate calm about Mina. Even in her darkest hour, she remains steadfast, calm and hopeful. She is referred to as a ‘light’ by several characters in the show. I absolutely agree she is a light. She has this wonderful juxtaposition about her in that she has this ethereal aura, yet I feel is one of the most grounded characters in the show.”

To find the strength she needs to play this role, Meredith recalls a quote by the great actor Meryl Streep, who once said, “acting isn't about being someone different. It's finding the similarity in what is apparently different, then finding myself in there.”  Like Meryl, Meredith “tries to find bits of myself in every role I play. The challenge for me in playing Mina will be tapping into my inner warrior – the fearless, yet grounded part of myself – and put that into my character.”

While Meredith is making her Barn debut in Dracula, she is certainly no stranger to theater.  Meredith tours the midwest nine months out of the year with the Michigan Shakespeare Festival's productions of Romeo and Juliet (as Juliet) and Macbeth.  She also performs at Performance Network in their Children's Network series show Big Bully (Betty). She has worked professionally in several local and regional theaters, and her film credits include All of My Friends on Barrett Street (Kelsey) and Five Year Engagement (Thanksgiving guest).

The Farmington Players' production of Dracula is proudly sponsored by Weinstein Jewelers.  The show runs October 11 through November 2. Tickets can be purchased online at www.farmingtonplayers.org or by calling the box office at 248-553-2955.
Posted by Tony Targan at 3:46 PM No comments: