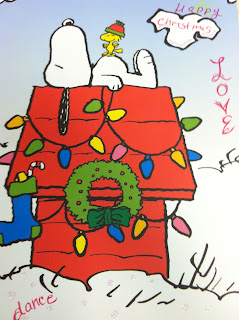 After 13 performances in 17 days, A Christmas Carol has successfully completed its whirlwind run.   I’d like to use my final post about this show for some personal reflections.  (I’ll try not to get too sappy or sentimental.)  The holiday season is a time to celebrate, rejoice and give thanks.  But it is also a time to remember, and sometimes the loss of a loved one can be especially poignant at this otherwise festive time of year.   If I can speak for the cast and crew of A Christmas Carol, we are especially thankful that our performances touched members of our local community in so many ways.   It was nice to hear patrons’ positive post-show comments, and nicer still to have some of our youngest audience members approach us for autographs.  But it was two letters we received that meant the most to us.
Marian Myles sent us the Snoopy card pictured above, along with a handwritten note that read (in part) as follows:  “I enjoyed your barn and the play so much!!  … I was so excited to be there and it got me out of my winter-holiday blues.  I miss my sister Nancy so much but I know God is taking care of her with his angels.  She would want me to be happy and celebrate her life every day.  … What a miracle performance.  It lifted my heart and soul.  I felt like Scrooge [dancing] in that London attic, my spirit lifted.  … P.S. I had to give each cast member a big kiss for a very enjoyable play!  It felt great.”
Gillian Faust (originally from London, England) expressed the following sentiments:  “I want to express a sincere and hearty ‘Thank You’ for a most delightful evening earlier this month.   My husband, a huge fan of the original movie, enjoyed the different interpretation of the story and I was thoroughly delighted with the polished performances and especially impressed with the young actors who were as professional as any I’ve seen on the stage.  The English accents, especially the East End cockney dialect, were ‘spot on’ and the English Country dancing was brilliantly choreographed and perfectly executed.   Without exception, the actors were talented and I particularly enjoyed and was moved by that beautiful duet performed by the two young lasses.  With many thanks, and the best of British luck for a continued successful run. … Happy Christmas and God bless us, every one.”
To paraphrase Scrooge, the true happiness cannot be measured out in dollars.  As a Carol cast member, I am more than glad to be paid in smiles.
For information on upcoming shows in 2012, go to www.farmingtonplayers.org or call the box office at 248-553-2955.  Find us on Facebook under "Farmington Players".
Posted by Tony Targan at 11:11 AM No comments:

When Amy Lauter Sells Out, Audiences Buy It!

When Charles Dickens hands out the roles in our version of A Christmas Carol, he asks Mrs. Stanfield, played by Amy Lauter, to portray “all the young and available ladies.”  Amy embraces this task with enthusiasm: selling it, selling out, and never selling herself short.  For example, when director Nancy Cooper first encouraged Amy to play her Charwoman character as crazy, Amy admits that her characterization was not working well:  “So I was trying to think of a way to be uninhibited and ‘drunk’ is what came out. Nancy words were, ‘if you are gonna play it that way – give it your all – sell it,’ so that is what I have been working towards.”  Amy has been so convincing as a drunk that even an accidental fall on opening night seemed so in character that the audience didn’t even catch on.

Amy’s other characters are equally charming, playful and distinctive.  She plays hide-and-seek as Bob Cratchit’s daughter Martha. As Mrs. Stanfield, she teases husband “Stanny” by plucking away his violin bow, claiming that “several alley cats would disagree” that he plays a fine fiddle.  And she practically steals the show as Mrs. Fred’s Sister, whose infectious laughter is as unique as her name is generic.  Amy came up with Mrs. Fred's Sister's giddy laugh at Nancy’s suggestion and made it her own:  “The laugh is a little contagious – once I got it, I got it, and love doing it. Fred’s parlor scene started out feeling like a bit of a ‘throwaway’ – but has blossomed into one of the most enjoyable scenes in the show.”
Amy’s favorite character is Belle, who was engaged to the young Ebenezer Scrooge: “I really like playing Belle, as she is pivotal in the ultimate destruction of Scrooge’s personality and lifestyle. I can relate to her on a better level than the other characters as well… so I find her a little easier to understand.”  Amy’s portrayal of Belle as a young woman who is torn between her love for Ebenezer and her need to stay true to herself is truly one of the most poignant moments of the play.  We begin to understand how the loss of that love transformed young Ebenezer into bitter old Scrooge.
To watch Amy on stage, it is easy to believe that she is really having fun: “I have been having a ball on stage – this is truly an ensemble show – and we have a very solid cast and crew. In terms of the overall experience, I have really enjoyed being a part of this cast – and can honestly say it has been one of the best casts I have been a part of in terms of chemistry and balance. We are all constantly laughing and enjoying each other’s company backstage – I think we can all say that. I have also appreciated the way the kids have all been treated as well – all of the adults in the show have treated them as equals – cast mates.
As Bob Cratchit would say, “That’s a high compliment indeed,” as Amy is a veteran of several Barn shows, including Gypsy, Proof, Guys & Dolls, Oklahoma and It’s a Wonderful Life. She recently produced To Kill A Mockingbird and has also directed shows including Miracle on 34th Street and Chapter Two.
Tickets for the remaining performances of A Christmas Carol (December 15th through 18th) are available at www.farmingtonplayers.org or by calling the box office at 248-553-2955. Find us on Facebook under "Farmington Players".
Posted by Tony Targan at 6:43 PM No comments:

A Christmas Carol Calls To All Creeds

So what’s a nice Jewish boy doing in a play like this?  Armand Banooni might not be the most likely actor ever to be cast in A Christmas Carol, but he fits right in with the Farmington Players’ production of Charles Dickens’ classic tale.   Armand says, “When I was given the chance to be a part of A Christmas Carol I wanted to be in it not only to improve my English accent under the expert tutelage of our own Joan Boufford, and not only to have another chance to work with Nancy Cooper as my director, but also to be part of a Christmas show for the first time.”
Like most actors in the show, Armand plays several characters, starting with Frederick Dickens, Charles Dickens’ nephew:  “Fredrick is the kind of person who enjoys a good laugh and has a good sense of humor.  He enjoys the ‘theatricals’ Charles Dickens often has them perform.”  Frederick is charged by Dickens to play a number of characters, including Fred, Peter Cratchit, Young Ebenezer, Ole Joe, and the Ghost of Christmas Yet to Come.
Armand’s favorite character is Fred, and observes that “though his uncle Scrooge is less than cordial to him, Fred still has nothing bad to say about Scrooge and won’t give up on him.  He has a slightly irreverent attitude, which I tend to have as well, as he makes fun of his uncle.  But he cares about the people in his life and enjoys being the consummate host.”
Even though Armand is Jewish, he finds the message of A Christmas Carol to be universal:  “It is a play about redemption and repentance.  We find ourselves rooting for Scrooge as he is given the chance to examine his life and see how and where it went astray.  Scrooge is given a unique chance to change how he lives his present life and thanks to a glimpse of his possible future, change the dire outcome that could befall him.  We are shown that it’s never too late to change ourselves for the better.”
Opening weekend was a great success, so remaining tickets (through December 18th) are selling fast.  Buy yours today at www.farmingtonplayers.org or call the box office at 248-553-2955. Find us on Facebook under "Farmington Players".
Posted by Tony Targan at 1:31 PM No comments:

All the Creatures Were Stirring ... It's Opening Night!


There is nothing like the excitement, anticipation and trepidation of opening night.  I imagine it is what a tightrope walker must feel when he first performs without a safety net.   As Roger DeBris said to Carmen Ghia in The Producers, “Will they love us?  Will they hate us?  The anticipation is killing me!”   Unlike The Producers, which was an over-the-top, anything-goes comedy, A Christmas Carol is more about the story than the gags.  Don’t get me wrong. There are still plenty of amusing moments, and even some slapstick comic relief, but A Christmas Carol’s brand of humor is clever and witty, not crass and crude.   The strength of this performance is the genuine warmth and creativity that the actors bring to the stage in this holiday classic.
Most people know the basic story line:  Ebenezer Scrooge, a hard-hearted miser, thinks that Christmas is for fools who should be “boiled in their own pudding and buried with a stake of holly through their heart.”   He is visited by various ghosts who show him glimpses into his own past, present and future.   Scrooge is humbled, redeemed, and truly transformed by the experience, and ultimately becomes a generous and gregarious celebrant of the Christmas holiday.
What you might not know is that the Farmington Players’ production of A Christmas Carol begins not with Scrooge, but with the tale’s author Charles Dickens (both enthusiastically played by Dorne Lefere).   When Dickens’ family and friends gather for a Christmas Eve celebration in his home, instead of telling them all a story, Dickens puts his guests to work in performing the tale that we now know as A Christmas Carol.   This play-within-a-play context shows the family members creating their own magic with various accents, despite limited costumes and props.  The 10 actors portray over 40 characters and are also onstage observers of each other’s performances, which helps bring the audience into the action.

We hope that you come out to Barn to see what we have created.   Some tickets remain for opening weekend and other dates (through December 18th) are selling fast, so buy your tickets today at www.farmingtonplayers.org or call the box office at 248-553-2955. Find us on Facebook under "Farmington Players".
Posted by Tony Targan at 9:31 AM 2 comments: